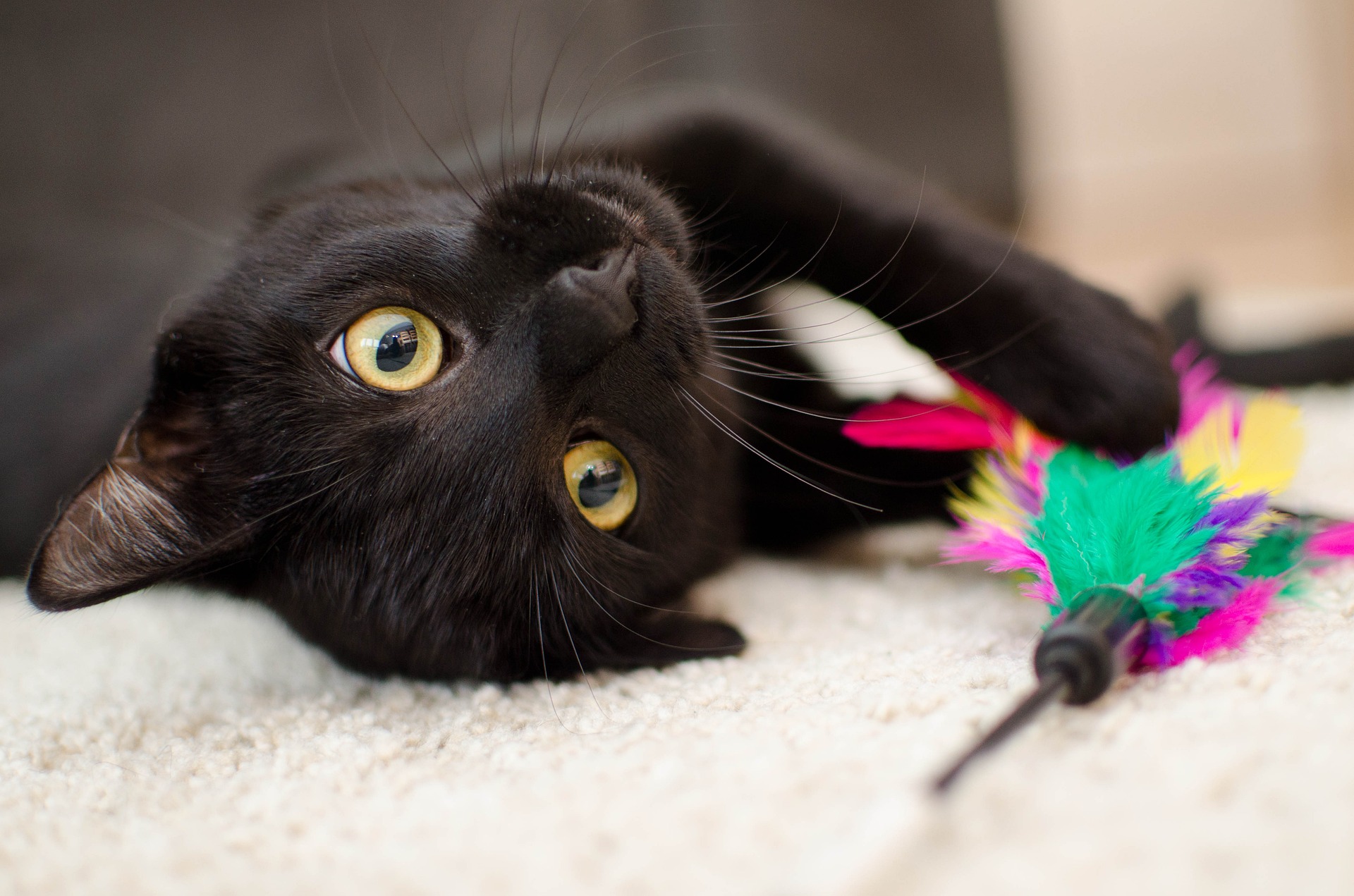 We first met Lilly in May of 2017. Her story started in a perfectly ordinary way, at least for us. Always the chunky cat in the house, she’d been gradually losing weight and was starting to look a little bit raggedy. On top of that, she had recently started drooling, which struck her humans as being a bit odd for a cat. Still, nothing could stop her from chowing down on her meals or from coming over in search of belly rubs, so Lilly’s people didn’t think too much of it. They wondered if she just going through normal changes as she aged, or was finally getting in shape. The drooling didn’t stop, though, and one day Lilly’s humans noticed that her lip had begun to droop, revealing what looked like severely swollen gums underneath. They were concerned that a bad tooth was to blame, so they called us to take a look.

When Lilly’s human took her out of her carrier at the hospital and we got our first look at her sweet little face, our hearts sunk. This definitely wasn’t your ordinary bad tooth, and it wasn't something we could fix in a day. This looked like a tumor, and a pretty aggressive one at that. Had this really happened over the course of only a week or two, as Lilly’s owners suspected, or had this been brewing for six months or more, hidden by her thick black fur? The news got worse and worse from there. Sedated xrays of her mouth revealed that Lilly’s problems didn’t end with the mass at her gumline. Nothing about her jaw was normal. Lilly was missing most of her teeth despite never having had dental surgery before, and what few teeth remained had severely infected roots.

To find out what was really going on with this mass, though, we needed to start by taking a closer look in surgery, so Lilly’s humans brought her in the following day to allow us to remove most of her remaining teeth and take a sample of the mass to send to the lab for analysis. Despite this first round of oral surgery, though, Lilly's severely weakened jawbone put her in a difficult situation. She still had retained roots that we couldn’t get to without additional surgery, because removing those roots while her jawbone was so weak would risk breaking her jaw. However, it was possible that those roots were causing an infection so severe that the mass we were seeing was actually just a massive tooth root abscess that wouldn't have a chance of resolving until after we removed the diseased roots. For Lilly, the best case scenario would involve another anesthetic procedure to remove the remaining roots once antibiotics had allowed her severely infected jawbone to begin to heal. We had to be mindful, though, of her worst case scenario, which was that this mass ultimately had less to do with infection and more to do with cancer. We wouldn’t really know what we were dealing with until her biopsy results came back from the lab, so we sent Lilly home with a powerful antibiotic and pain medications to help her heal comfortably while we waited for the results of her biopsy.

Despite the news that Lilly’s jaw was not looking good, her humans were nowhere near ready to give up on her. She was still doing all the things she loved! She was eating, drinking, bossing her feline brother around, and chasing leaves on their screened-in porch! How could a cat this happy be this sick? After a few days though, Lilly’s biospy came back and our hearts sunk again. According to the lab, she really was this sick. The biopsy report listed a grave diagnosis: melanoma or osteosarcoma with secondary osteomyelitis. In other words, as far as the lab was concerned, Lilly definitely had cancer in her jaw, and she had a severe infection of the jawbone alongside that cancer. To make matters worse, the lab wasn’t sure if it was oral melanoma or osteosarcoma that we were dealing with. Additional testing could reveal the which cancer Lilly had, but the testing was expensive and the statistics did not look good for either type of cancer. Oral melanoma was likely to spread elsewhere in her body and could quickly become other types of cancer in other places. Osteosarcoma could be cured only with removal of half of her jaw, and even then, the chance that it could recur at a later date or spread to another part of her body was troublingly high. Lilly’s owners were looking at an average survival time of between two and six months, which was not good news considering the fact that this may have already been going on undetected for several months. Looking at their happy, playful cat though, Lilly’s owners weren’t anywhere near ready to give up. It still wasn’t impossible that the lab results were incorrect and that this was all the result of a severe infection in Lilly’s jawbone that would be cured with antibiotics and additional oral surgery. Knowing what we were really dealing with could give Lilly’s people an idea of what their options were for treatment, and it would confirm the lab’s analysis that this was cancer at all, so they chose to send the sample of the mass out for additional testing and hope for the best.

Weeks passed as we waited for the results of the specialized testing to come back, and Lilly’s condition appeared to worsen. She continued to lose weight despite the fact that her owners had tripled the amount of food they gave her. She had also been on antibiotics for three weeks with no visible improvement or reduction in the size of the mass at her gumline. To make matters worse, one day Lilly abruptly began vomiting up a foamy, bloody substance and refused to eat her dinner. This, from the cat who had never refused a meal in her life. We feared the worst, and began to prepare her humans for the possibility that they might not have very much time left with their sweet cat. We were still waiting on the results of the testing that would determine what kind of cancer Lilly had, but her vomiting was concerning, and there was a distinct possibility that either her medication was beginning to make her sick, or worse, that her cancer had spread to her stomach. We switched her medication just in case that was to blame, gave her an easily digestible food to eat and two days later, Lilly was a new cat. She was eating ravenously again, her personality had gone back to normal, and she was no longer throwing up. While this was great news, Lilly’s humans, along were her doctors, were left with even more questions. Could it really have been her medication that was making her sick, and not something more malicious? Lilly’s owners had a gardenia plant on their porch that she had recently been playing with. Could its leaves have been what made her sick, and not her medication or her cancer at all? There was no way to know, and with Lilly’s return to normal, we could only hope that the owner’s plant or Lilly’s medication had been what was making her so sick, and not cancer spreading from her mouth to her internal organs. Looking at their happy, much improved cat, Lilly’s humans weren’t ready to give up, and we had reason to be cautiously hopeful again.

Only a few days later, after weeks of waiting and wondering, Lilly’s additional testing finally came back and unbelievably, her tumor was not a tumor. Lilly did not have cancer. Instead, she had such a severe osteomyelitis, or bone infection, that her cells had mimicked the appearance of cancer on the original biopsy. Unwilling to call Lilly’s humans only to give them false hope, we called the pathologist and asked how accurate this new round of testing really was. The news got even better from there. The pathologist was certain of these results. The additional testing the sample had undergone was very accurate. Cancer couldn’t be 100% ruled out, but at this stage, it looked highly unlikely. Lilly’s humans got the good news they had been holding out for.

Although this was a tremendous breakthrough, Lilly still had a very long road ahead of her. She would still require at least one additional surgery and twice daily oral antibiotics for at least six months. Finally, though, we had a reason to be hopeful. Lilly’s humans were in it for the long haul, and Lilly still seemed blissfully unaware that she was even sick. Her infection had sent her metabolism soaring, so her owners had increased the size of her meals even further. Lilly was now eating four times the amount of food she was eating when her infection was first discovered, and was loving every minute of it.

In late July, 2017, after more than two months of twice daily antibiotics, Lilly came back to see us for a second oral surgery in hopes that her jaw would be strong enough for us to aggressively investigate the issue without the risk of breaking her jawbone that we had faced during her first round of oral surgery. Dental xrays showed that both of her two remaining teeth were severely diseased and the ball of boney, severely diseased tissue that had first appeared to the pathologists as a cancerous mass was still present but able to be safely removed. After surgically removing Lilly’s remaining teeth and the ball of diseased tissue in her lower jawbone, she was given additional antibiotics and began what was ultimately a full recovery from her close encounter with one of the most aggressive periodontal disease processes we’ve ever seen. Untreated, Lilly’s jawbone would have weakened further and fractured, leaving her too painful to eat and leaving her susceptible to even more severe, life threatening infection.

It’s not every day that we see animals go through such an incredible recovery, from seemingly impossible circumstances to arms length away from being fully cured. Watching the worst case scenario turn into the best is one of the best parts of our jobs, and it's a privilege to watch our patients proceed through such a complicated treatment process unphased by round after round of seemingly impossible news. Lilly may be the outlier in her recovery, but she’s the norm in her attitude toward her illness. Through all of the trips to the vet in the much hated car, all of the gross medication to take, and all of the surgery she underwent, Lilly remained focused on all of her illnesses’ most positive qualities: the massive quantity of food she was able to eat, the friends she made, and the humans who never doubted her ability to heal. Today, nearly two years later, Lilly is absolutely thriving without those troublesome teeth thanks to the incredible power of modern veterinary dentistry, which has given us the tools and the technology to perform such extensive and curative oral surgery and give a cat like Lilly her life back.

Wishing you and your pets good health in the New Year!