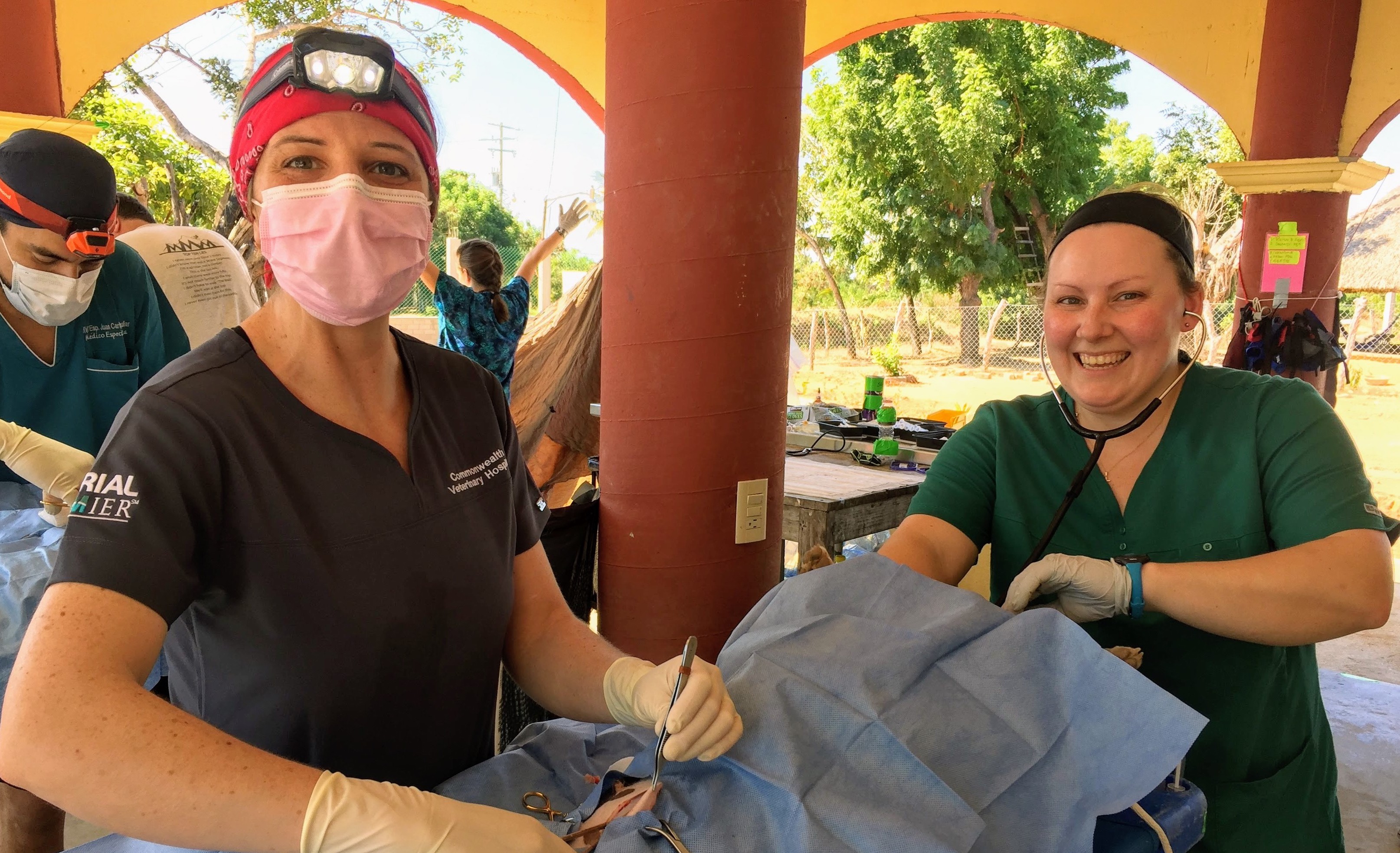 The Mazunte Project: A Veterinary Adventure to Mexico and Back

When I told people about my recent "spay-cation" to Oaxaca, Mexico, I got the same question over and over...What in the world could spaying and neutering dogs have to do with sea turtle conservation?? It turns out, the answer is quite a lot.

Imagine this: Your puppy is all grown up now, and it's time to be neutered. A quick call to the vet to schedule the surgery is easy as pie, right?

In the rural villages of Oaxaca Mexico, the nearest vet is hours away, and most folks don’t have access to a vehicle to take them there. Even if they were able to make their way to a veterinary hospital, many of those pet owners would have to choose between feeding their family for the week and being able to pay for veterinary care.

Because of this, the canine population in Oaxaca and elsewhere grows at an incredible rate. There isn't enough food to sustain all the dogs, and commercial dog food isn’t often available in these remote villages. When the dog population becomes too large for a village to support, it is common for groups of dogs to be taken to the coast and set free to fend for themselves. These dogs roam the area, feeding on wildlife, and for many years this spelled trouble for the sea turtles. To make matters worse, until sea turtles became a protected species in Mexico in 1990, these amazing creatures were also hunted by humans, as both the meat and the eggs were considered highly desirable.

All of this leads us to a little town on the southern coast of Oaxaca called Mazunte. Until 1990, Mazunte was home to a long standing sea turtle meat processing plant. Once sea turtles were made a protected species, the property was transformed and reopened as a sea turtle research & rehabilitation facility. Unfortunately, the end of legal hunting was not quite enough to allow the population to rebound. Thankfully, a wildlife veterinarian named Marcelino Lopez was determined to help protect these vulnerable creatures. In addition to being a major force in convincing the Mexican government that the turtles needed protection, Dr. Lopez worked incredibly hard attempting to save the sea turtle population on his own through the Palmarito Sea Turtle Rescue Organizaton.

Funding and manpower were a constant struggle at first, but the project gained momentum and resources in the early 2000’s when Dr. Lopez formed a partnership with a Massachusetts veterinarian, Dr. Rich Roger. Together they started the Mazunte Project. Along with a small group of like-minded veterinarians from New England, Drs. Roger and Lopez traveled to local villages bordering the sea turtle nesting beaches. They offered free spay and neuter surgeries for as many pets as they could accommodate before the sun went down each day. They paid their own expenses, collected donated supplies, and used whatever level surfaces they could find as makeshift surgery tables. Each year, they made adjustments to their plan and visited new villages as often as they could.

In the 18 years since Drs. Lopez and Roger started their work, the team has grown considerably. This year, 32 veterinarians, technicians, students, and other volunteers gave their time and efforts to make the trip another success. It is estimated that the work of this growing team and the Palmarito Sea Turtle Rescue help more than 40,000 sea turtle hatchlings make it to the ocean each year. This year, Dr. Wissel and I were lucky enough to be a part of that team.

Despite a trip down that was plagued by winter storm Greyson, we managed to make it! We arrived in Oaxaca a full 24 hours later than expected, after 36 grueling hours of travel (with some rebooked flights that I still don’t quite know how Dr. Wissel managed to get us on). It was a sunny Saturday afternoon, a stark contrast to the weather in New England! We hopped in our rental car (the trustiest little Chevy Aveo I’ve ever had the pleasure of riding in), and hit the road.

Outside the airport we drove along windy mountain roads with views that varied from sprawling untouched valleys and mountain vistas to gullies filled with garbage, makeshift shacks, and concrete dwellings along the roadside. It was disheartening to see so much plastic trash along the roadway, but with no organized sanitation disposal system, it was not surprising. I could go on for another 3 pages about how we should all make better consumer choices- avoid plastic, choose products in glass bottles, avoid single serving plastic packaging, etc, but I’ll save that for another day!

The sign that marked the turn to the beach town of Mazunte had fallen down, but thankfully our team leader had given us some pretty detailed directions that included how many intersections to pass through and what we would see if we went too far, phew! We were out of cell service area, so GPS wasn't an option. Most places didn't have addresses anyway, so landmarks were the way to go! We made it to our charming (read: beautiful ocean view, with a side of bed bugs and no hot water) posada just before sunset.

The following day we got to meet with many of the other volunteers, and then our small team split off to sort and organize our supplies for the week. Some supplies had been stored in town after the previous year's trip, but the warm humid air caused many of them to be ruined by mold and mildew. Luckily, each team member brought down as many surgical supplies as they could afford, and fit into their suitcase. We had just enough supplies to make it through the week. Once we had everything organized and packed in our cars, we had just enough time to shower off the mold and head to dinner.

The next morning we all met up at the OXXO station (a small local convenience store) bright and early. This kicked off a week in which our group of thirty two volunteers split into four teams, and were able to spay and neuter just over 500 dogs. We visited different villages each day, some with more patients than others, and a few with too many pets for us to get to before before the sun went down. The local people were incredibly welcoming and thanked us for donating our time and skills to provide this much needed service. One local woman even cooked a delicious lunch for our entire team! Her spicy and delicious chicken mole was much appreciated. There were no stores to pop into for lunch, and we had been eating avocado wrapped in a tortilla with hot sauce for days!

Our patients ranged tremendously in size and shape, from little chihuahua and terrier crosses to enormous Pyrenees or Akita crosses. Going into the project, I expected mostly mid-sized "beach dogs," but I was pleasantly surprised at the wide variety we got to work with. Even if they technically belonged to someone, the dogs we worked with roamed freely and co-existed with all the other animals in the community. This meant that none of these dogs were accustomed to being handled, let alone wearing collars or leashes. Folks brought dogs to us with all sorts of makeshift collars, from belts, ropes and chains, to a few who came leashed by beautiful scarves! Some of the dogs were wary of us gringas, but for the most part they were quite friendly. In addition to all the dogs, we had some feline patients as well! The locals brought their cats in a variety of different types of bags—from burlap sacks to purses—and they sat patiently with their owners until it was their turn. No matter what their size or species, each patient was accompanied by a dedicated owner who waited for hours, often giving up their daily wages on the local farms, to be seen. The dedication of these owners to their pets was heartwarming to see, and it made our work even more rewarding. My favorite patient on day one was a little chihuahua that came and sat on her owner's lap. She was very happy to be with us humans, but if another dog got too close, watch out! She gave them a big growl and showed her tough little chihuahua teeth! She sure had a lot of personality!

Despite having owners who cared for them, many of the dogs we treated were infested with fleas and/or ticks. These folks want to protect their dogs, but don't have access to the monthly preventatives that we commonly use here in the US. In the towns with rampant tick infestations, surgeries were often more difficult, too. Tick-borne disease can cause dogs to have problems with their clotting factors, so their tissues bleed profusely when surgery is being performed. Thankfully, we had brought enough supplies to give our patients the supportive care they needed to recover smoothly. We were also lucky enough to be able to provide dewormer and flea/tick treatment to every patient we treated. Even though we could only give them a few months of relief, it will help. We're hopeful that next year we'll be able to bring enough supplies to give each patient more doses. It's incredible to think about, but even things as common as the flea and tick treatments or ear medications that we dispense regularly here in the US are nearly impossible to come by in these villages. Something as simple as an ear infection can greatly affect a dog's quality of life in these rural areas. For this reason, our mission for next year is to bring more of these common supplies to help improve the quality of life for these patients. We can't wait to see the impact that next year's team will be able to make!

A huge thank you to Jennifer Hellerman (Boehringer Ingelheim-Merial) and Paula Brennan (Henry Schein Animal Health), whose generous donations enabled us to bring some much needed medications to our patients this year.

If you would like to make a donation to help us purchase supplies for next year's journey, please click here:

If you would like to make a tax deductible donation directly to the Palmarito Sea Turtle Rescue, please click here:

Thank you for your help! Keep your eyes on our Facebook page for more pictures from our grand adventure!